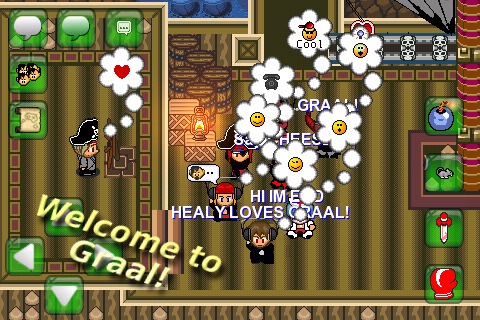 GraalOnline Classic has been launched in 1998 on Windows PC by Stephane Portha as one of the first MMOs ever, after the game genre has been made popular in 1997 by Ultima Online. It has ben reintroduced on iOS, Android and Facebook in December 2009 as one of the first games to use in-app purchases and the free-to-play business model. Classic is a massive multiplayer online game with thousands of simultaneous players in a medieval environment with retro cartoonish look. It follows the tradition of GraalOnline with player created content. Players can customize their character with their own hand drawn graphics and build houses with furniture. The game is centered on interaction between players, with chat and messaging, sparring with various weapons such as bow and bomb, competition between guilds and quests.